The other day I was cutting up some red potatoes for some dish I was cooking, and decided to save the end off of one of them, which happened to have a couple of nice eyes on it. I threw it in a flower pot full of potting soil and started watering it and a week later I’ve got this little guy:

I picked up a five-gallon food-grade bucket at the Eegees corporate office (only $2.50, with the lid!) and drilled some holes in the bottom:

I found an old piece of shade cloth and cut it to line the bottom: 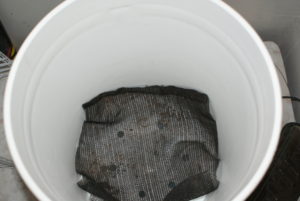 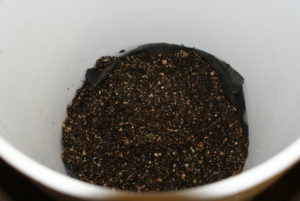 Kinda hard to see it, but it’s in there. As it grows, I’ll keep filling the bucket up until it gets to the top, and in a few months I will hopefully have a bunch of potatoes!