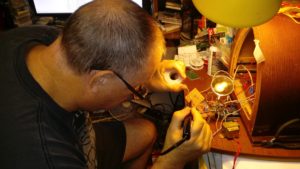 So I was going to document the project I posted about back in November, but I got so wrapped up in building and coding it, that I barely remembered to take pictures of the process. So here’s what I did:

I found a replica of an old Gothic arch radio, and gutted it. It had a 120VAC-to-9VAC transformer, so I built a rectifier to convert that to ~9VDC power the project. I used an Arduino to control the MP3 module I mentioned in the last post, based on input from a rotary encoder that replaced the tuning knob. The encoder could be rotated to select a track, and pushed to either play or paused, depending on the current status of the MP3 module. A 1″ OLED replaced the tuning dial to display the track number and play/pause status. For volume control, I ended up using the Arduino to read the resistance of the original volume pot, and then set the volume output of the MP3 module itself. This worked much better, and I managed to not blow up the 2nd module. Just as a precaution, however, the module got mounted to headers that I soldered to the board, so it could be replaced without having to desolder it.

The SD card was then loaded up with 150 or so episodes of “The Inner Sanctum Mysteries” and I presented to to my Grandma for Christmas, along with a little photobook that contained a complete track listing and some pics of me building the project.