Ordered an Arduino Nano a while back along with an ethernet shield that plugs right on to it. Finally got around to messing with it last night, and built a prototype tester: 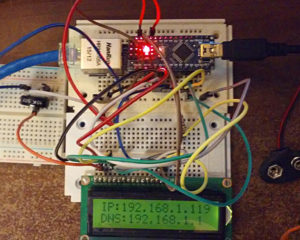 What I’m aiming for here is a small handheld device I can use at work to test data jacks to see if they are a.) live and b.) what subnet they are on. I’ve got the code working using the EtherCard library, and right now I’m pushing the IP, GW and DNS addresses out to the serial monitor, and the IP and DNS out to my trusty little LCD display. To paraphrase Sheriff Brody, however, I’m gonna need a bigger display.

As you can see in the above pic, if I don’t lose the text identifiers, I won’t be able to handle addresses that are using all three digits on all of the four octets. I suppose I could use the first line of the display for the text and the second for the address, and just have a push button that rotates through the different addresses, but I’d like to have it all on one screen.

I’ve been looking at various displays, and I’m leaning toward a 2.4″ Nextion display. The Nextion would be nice as it only uses four wires: two for data and two for power. Contrast that with my LCD which is using something like six data lines, two power lines for the display, two power lines for the backlight, a R/W signal line, and a contrast input from a potentiometer. That’s a lot of wiring.

I’ve been thinking about using a 7″ Nextion for the digital gauge project, so this would be a great way to learn the ins and outs of the device on a much cheaper model before pulling the trigger on buying the much larger (and more expensive) one.